Frontstalag - The Internment Diary of an English Lady 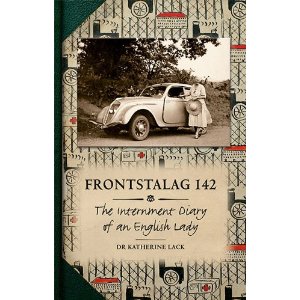 I've just finished reading Frontstalag 142 - The Interment Diary of an English Lady by Dr Katherine Lack, a really interesting book.  I often find myself reading about Prisoners of War in the the Far East, so it was a natural progression to pick up this book.

The book tells the story of the authors Aunt Fan, who was an English Lady living in France during the occupation.  Shortly after the occupation began, Aunt Fan and one of her sisters were picked up, along with other British residents and placed into Frontstalag 142, which would eventually hold around 2400 mainly British civilians.  Later she was transferred to Frontstalag 121, in Vittal, where hotels from the Spa town had been adapted for the prisoners before she was released at aged 60, considered to old to be any trouble.  During this period Aunt Fan kept a diary and drew many pictures of her surroundings, some of which have been included in the book.

The author has chosen to keep the diary together, with chapters either side telling the history of internment and other prisoners experience.  As you read Aunt Fans words, you are conscious of what she is not telling you.  She remains rather positive given the circumstances, the great British stiff upper lip appears present.

For me the most interesting thing about the book was the pictures she had drawn.  Sketches of day to day life within the camps she was in, capturing intimate moments, whether the nuns reading or a lady playing her cello.

I was also struck by one of the first comments that Dr Katherine Lack made.  She admits in the opening that during Aunt Fans life she had been conscious of the diary containing information on her experience of the war, but never really spoken to her about her past.  It was only after her death she opened the diary and discovered she had been a prisoner and the full story.

I seem to come across this time and time again, so if you are reading this, please, if you have an elderly relative, please make time to listen to their story now.
Posted by Rambling Wee Lassie at 02:29

Rambling Wee Lassie
Its odd how you finish Uni and get on with your life and suddenly realise that your brain cells are not as active as they once were. So, my aim here is to think, think about what its like being a woman in today's world, where do we get our inspiration from? Can we be everything we are supposed to be? How will history remember us women? How has history effected us? This is the Rambling Wee Lassies walk through life.

Links to Blogs and Websites